This restaurant is situated in one of my favourite parts of the world, and is located right on the Loire River.  It was recommended to us by the Chambres D’Hote that we were staying in in Drain.

Unfortunately due to the time of year it was dark by the time we reached the restaurant, and were unable to fully appreciate the view onto the Loire. 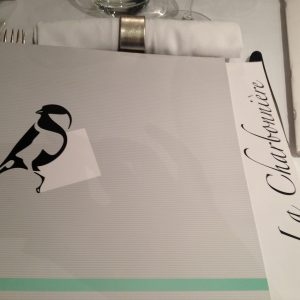 We were seated at the window, and received our menus.  It was quite a large restaurant, with only 3, maybe 4 tables with guests, and we were all together, which I felt was a little strange, but maybe it made for a better atmosphere. 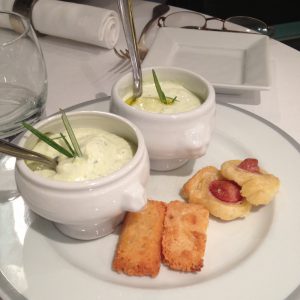 The table settings were lovely, we were offered bread and some kind of an amuse bouche.  I am being very vague here, but it was very strange, a large pot of some kind of creamy dip, and two tiny, pretty tasteless pastries.

The menu was good value, and we choose the three course, table D’Hote esque menu.

We both chose the same starter of terrine with a mushroom mille feuille. 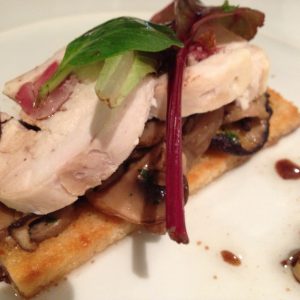 Nicely presented, the mushrooms were full of flavour, but the terrine a little rubbery. 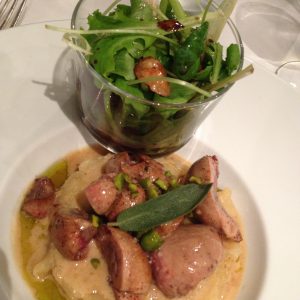 My main course was a disaster.  I chose the Veau (Veal) and didn’t realise the y would be veal kidneys! I did taste them however, but passed them gratefully over to my husband, who gave me his Thai fillet of beef.

To be fair the dishes were nicely presented, but lacked something, but not quite sure what.

The dessert was very ordinary, but quite acceptable, the biscuit was a bit tough, but the salted caramel ice cream was lovely. 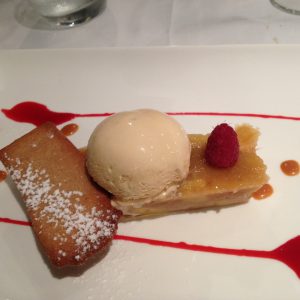 All in all, the meal was perfectly acceptable, but was quite ordinary, maybe with the sun shining off the water, and a fuller restaurant it might have made it an extraordinary experience.

Don't feel like cooking or baking? Visit our shop or email me at info@jenskitchen.ie.

View Shop
We use cookies to ensure that we give you the best experience on our website. If you continue to use this site we will assume that you are happy with it.Ok